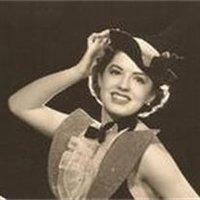 Anderson (Bryant), Constance M., 91, of Santa Barbara, CA died Sunday September 26, 2010 at her home. She moved back to California after many years of living in Honolulu, HI, Portland, OR, Tucson, AZ, Anniston, AL, and Los Angeles, CA. Her hometown was Walla Walla, WA. She was a member of the Loyal Order of Moose, Santa Barbara Lodge #605. Connie trained from an early age as a classical ballerina, danced with a Bob Hope Tour during WWII, and trained with the San Francisco Opera Ballet in the late 1930's. She later worked for a decade at her alma mater, Whitman College, in Walla Walla , then at Iolani School in Honolulu, before retiring, she worked in Portland for NW Psychiatric Consultants. She lived near her daughter and family in Anniston, AL from 1990-2000, where she was a member of the Golden Springs Seniors and a member of St. Mark UMC. She is survived by her daughter Connie Brown, of Anniston, her son, Grady Anderson of Cottonwood, AZ., her sister, Virginia Bedinger of Bradenton, FL, and five grandchildren: Ian Gnatz of Bangkok, Thailand, Kevin Gnatz of Anniston AL., Gaelyn Gnatz of Birmingham, AL., Peter Anderson of Lompoc, CA., and Laura Anderson of Sedona, AZ. She has one great granddaughter. She is also survived by her friends and caregivers Jackie Jisa, and her sister Carol, Elvira, Marissa, Marie Ezabeth, and Vicki who cared for her with loving kindness over the past few years. Thank you for being her family in our stead. She was preceded in death by her parents, Grady and Constance Bryant and a brother David Bryant. A memorial service will be held on Wednesday October 6, 2010 at 10:00 am at McDermott-Crockett Mortuary Chapel, 2020 Chapala St. Santa Barbara, CA (805) 569-2424.