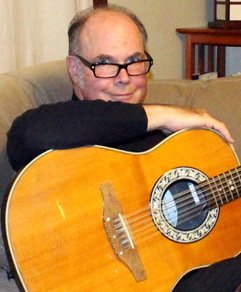 Richard was born in Los Angeles, California in 1955, the second child of Charles and Virginia Merritt.  After he overcame early childhood health challenges, his family moved to Santa Barbara where he first attended school.  He graduated from Aviation High School in Redondo Beach and later became a dedicated student in the Music Department of Santa Barbara City College.  Family and work life took him to Hawaii, Ohio and California.  He retired in 2009 to where he always felt most at home, in Santa Barbara, where he enjoyed living at the Maravilla Senior Living Community.  Richard lived for his music, his family and travel.   He was an accomplished vocalist and a member of City College choirs under the direction of Nathan Kreitzer and also sang with the Santa Barbara Choral Society.  He was a talented and beautiful guitarist, much to the pleasure of his family.   He enjoyed annual summer vacations on trains and cruise ships in North America and beyond.  He is predeceased by his beloved grandmother Bessie Bell and parents Virginia and Charles Merritt and survived by his brother Russell of Los Osos, his niece Melissa Merritt and husband Andrew Leonard and her young children June and Elliot of Pasadena, CA and his Texas cousins Ronald, Barry and Robert Merritt and Rita Freeman and their families.  He was a kind and gentle man who will be much missed by his family and all who loved him.  A memorial service for family members is planned.  In lieu of flowers, please consider a donation to Quire of Voyces at The Santa Barbara City College Foundation in memory of Richard Merritt (SBCC.org; SBCC Foundation, 721 Cliff Drive, Santa Barbara, CA, 93109).

To send flowers to the family or plant a tree in memory of Richard Merritt, please visit Tribute Store