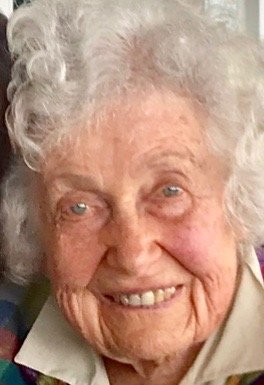 Margaret Singer, Santa Barbara artist and poet, believed that life and the universe were good, in spite of a childhood darkened by the rise of Nazism in her native Germany and the loss of family in the Holocaust. She was born in 1921 in Frankfurt to Leon and Gitel Singer and began painting as a child. She said that a sense of malaise pervaded her family’s life as the Nazis gained power. Children threw stones and called them names, and Jewish people began to disappear. Sent by her father to America, along with her younger sister Paula, Margaret arrived in New York City in 1939 and began a new life.

She worked in a factory in New York and was introduced by a friend to the American People School, where she studied art with Carl Nelson. After a chance comment by a young man on a Greyhound bus heading west, Margaret moved to Santa Barbara where she worked at different jobs, attended City College and then the University of California Santa Barbara where she received a Bachelor’s Degree in art and a Master’s Degree in educational psychology. After graduation she became a teacher at City College Adult Education and taught portrait, figure and landscape painting for 20 years.

Margaret’s vibrant, energetic paintings were featured in solo and group shows in Santa Barbara, and she said about them, “All the years I’ve been painting, I paint the same subjects…the people walking, marching and faces that haunt me.” She also wrote several poetry collections and chuckled that she could sit for hours looking for the right word while dishes piled up in the sink and laundry lay waiting to be washed. Margaret stopped eating meat as a child after witnessing a chicken being slaughtered and became a dedicated vegetarian and devotee of living a healthy life, including riding a bike until she was in her mid-eighties.

Margaret was a longtime member of Congregation B’nai B’rith and the Jewish Federation of Greater Santa Barbara, both caring, engaged communities where she found friends and intellectual peers and delicious food. She relished taking out-of-town company to services and introducing them to the rabbi and members of the temple. Even at 97 Margaret marched down State Street to honor Martin Luther King earlier this year and worried anytime she saw her beloved world becoming a less hospitable, forgiving place.

Margaret was preceded in death by her brother, Sidney Singer, and is survived by her sister, Paula Orbach, and brother, Henry Singer, as well as ten nieces and nephews. A nephew, Jeffrey Orbach, died in 2009.

Celebrations for Margaret Singer are as follows:

June 11, 2019: Jewish Federation of Greater Santa Barbara (JCC) will have a lunch at 12:00 pm with a Margaret centric slideshow , followed by showing Margaret’s documentary movie after lunch. This will be held in the Schmooze room at 524 Chapala Street, Santa Barbara.

To send flowers to the family or plant a tree in memory of Margaret Singer, please visit Tribute Store

Share Your Memory of
Margaret
Upload Your Memory View All Memories
Be the first to upload a memory!
Share A Memory
Send Flowers
Plant a Tree