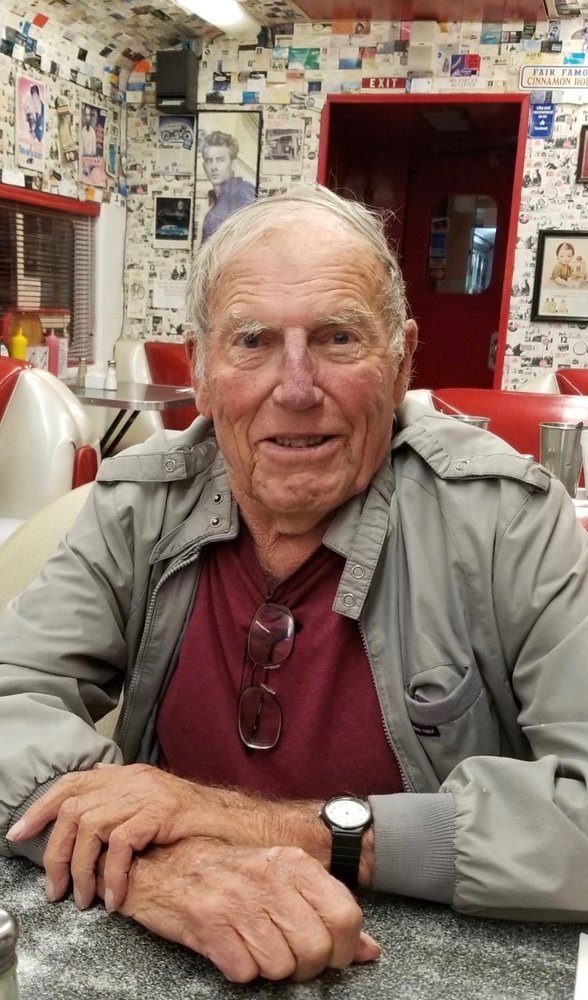 John Ferriss Turrill, 96 years well lived, passed away peacefully at home in Arroyo Grande on March 1, 2020.  A Connecticut native, he was born on his mother Edith’s birthday, October 22, 1923.  His father, Henry S. Turrill, was their town’s doctor. He had one sibling, his older brother Roger, who predeceased him. He also was preceded in death by his first wife, Doris Jones Turrill. He is survived by his second wife, Evelyn Cole Turrill; three daughters by his first marriage (Catherine Turrill Lupi, with husband Alberto Lupi; Barbara Turrill, and Jandra Oliver); two granddaughters (Erica and Ona Oliver); one great-grandson (Austin Macdonald); two stepdaughters (Margie Hurd, with husband Robert Hurd, and Bettie Shaw); and four step-grandchildren (Elizabeth Hurd, Everett Hurd, Kerry Shaw, and Adam Shaw).

John was a propeller specialist in the Army Air Force’s 575th Bomb Squadron during the last years of World War II. He held the rank of technical sergeant and was stationed in England, Belgium, and France between 1944-1945.  After his discharge from the military in November 1945, he traveled across the country and enrolled in the Cal-Aero Institute of Aeronautics in Glendale, California, where he trained to become a master aviation mechanic.  He worked in aviation for over 30 years as an A&P (Airframe and Powerplant) mechanic with inspection authorization, holding jobs at airports in California, Connecticut, and New York.  He also operated a lawnmower shop in Connecticut for over a decade, Kent Lawn & Garden Service (1954-68), and worked briefly in the Telegram-Tribune’s mailroom. He was a skilled mechanic and handyman, able to fix almost anything.  After his retirement from aviation, John worked in the pro shop at San Luis Obispo’s Laguna Lake Golf Course for several years. He also became an active golfer, playing frequently with a group of close friends. The hole-in-one that he made on the fourth hole at the course in May 2005 was reported in the Tribune.

John met his first wife Doris in California in the late 1940s, when they were both working for Southwest Airways. They built a home in Palo Alto, where their first two daughters were born. In 1955, they moved to his hometown in Connecticut, where their third daughter was born. After returning to California in 1981, they lived briefly in Camarillo and Cayucos before settling in San Luis Obispo, where Doris died in 1991. Nine years later, John met another transplanted New Englander, Evelyn Cole, at an event hosted by the San Luis Obispo chapter of the Widowed Persons Association. He invited her for a walk on the beach the following day and they were married two years later. Evy loved John deeply during the last twenty years of his life, as much as he loved her. Theirs was an amazing love story for they never fought and they had great fun together. They hiked, kayaked, and body-surfed along the Central Coast. They also enjoyed riding the rails, crossing the United States and Canada repeatedly by train. John was a dedicated cyclist as well.  He biked everywhere, picking up discarded cans and bottles for recycling. Once, when a worker on Tiffany Ranch Road thanked him for collecting roadside debris, he said, “I make a dollar for every five miles I ride.”

Throughout John’s life, both in Connecticut and in California, performing community service remained a constant.  He was dedicated to the idea of participatory citizenship, volunteering with RSVP (Retired & Senior Volunteer Program), Meals on Wheels, Hospice of SLO, Special Olympics, the San Luis Obispo Railroad Museum, and other organizations.  As a result, he received many certificates of appreciation.  He accepted this public recognition with some reluctance because, in his mind, serving others did not make him special. He also refused to participate in activities that glorified war. John demonstrated this side of himself very clearly when he turned down the invitation to be part of an “Honor Flight” to Washington DC for WWII veterans.  True to form, he did not believe that his military service was extraordinary in any way. His family and friends remember this quality of his with admiration, exasperation, amusement, and much love.

Later this spring, a celebration of John Ferriss Turrill’s life will be held at the Rock & Roll Diner in Oceano, where John and Evy dined once a week for several years.

To send flowers to the family or plant a tree in memory of John Turrill, please visit Tribute Store

Share Your Memory of
John
Upload Your Memory View All Memories
Be the first to upload a memory!
Share A Memory
Send Flowers
Plant a Tree